THE EVOLUTION OF FIERCE 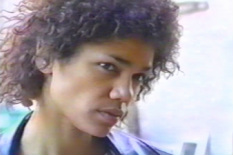 It’s been a long time since I’ve truly considered myself a filmmaker. It feels like it was a stage in my life. Like being a teenager – all the excitement and newness, all the angst and growing pains, all the bad fashion choices and arrogance of “knowledge”.

As a filmmaker, I made two good films – Sangre de Toro and A Little Fierce. The former got me in to film school, the latter got me out. Both deal with self determination and both end in ambiguity.

A Little Fierce evolved a lot over time. Originally it was going to be a hybrid doc/narrative. I was really into female heroes at the time and frustrated by the lack of African-American examples. I watched a lot of Pam Grier movies and though many were so campy and so questionable, I still took away a lot from whatever character Pam was playing and felt like she should be reclaimed. Of course Quentin Tarantino felt the same, but he had access to the real Pam Grier and I did not. Nevertheless, I wanted to create a character who fought for justice using whatever methods available to her and made no apologies. Thus Fierce was born.

But I didn’t want to just make a “Fierce” film because at heart, I’m not really into making “action films”. I don’t love them and I don’t think I would be good at it. I was interested in how a young girl would be influenced by having a consistent role model in Fierce and how that might play out in her life. And so my main character, Danny was born, imaginative and willful but still young and impressionable.

As I have been revisiting the film, I can’t help but think of all the wonderful people who helped me, who were so supportive and who donated their time and money for the sake of the film. People can be so good sometimes.

I shot about 10+ interviews before I made this film. I interviewed a variety of African-American women I knew on their thoughts about superheroes and role models and their childhoods. One day I will transfer those old videos and post them. It’s an important document. And I don’t think I’m done with this subject, not by a long shot. Here's a link to the 30 minute film, "A Little Fierce".